Creepier by the Dozen #4 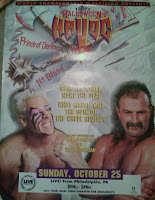 Wait a sec, Barbarian gets a WCW World Title match? The pre-match training video from Barbarian shows Cactus Jack breaking blocks with a sledgehammer over Barbarian’s back. Strange. Hold up, why is Simmons coming out with Goldberg-esque security? These questions were never answered. This was a slow, prodding power match and it clearly showed that Barbarian belonged nowhere near the World Title scene. There was some brawling on the outside with Simmons taking a rail bump and then Barbarian ramming Simmons into the ringpost. Then they go back in and Barbarian applies a cobra clutch? Huh? JR and Ventura kill time on commentary by debating about the authenticity of the word “shin-a-no-maki”, which is what JR called the hold that Barbarian applied. Simmons breaks out and a few minutes later gets a win with a powerslam. Nothing of value here and probably one of the worst WCW World Title matches I’ve seen in a long, long time.
Posted by Adam at 12:00 AM