Creepier by the Dozen #1 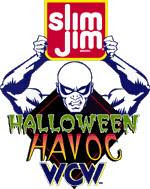 Since Halloween Havoc has always been one of my favorite pay-per-views, what better way to look at it than selecting a random match from each show, similar to what I did in the WrestleMania Matches of the Day from March, ending a few days before Halloween. Here's hoping kids come to your door dressed as their favorite lucha stars!

PS: Please be sure to check out the 3rd annual Review the World Halloween Special that will premiere October 23rd on Brian's site, www.reviewtheworld.com

Now, onto the countdown ...

It’s weird to see the Express and Doc working face here, as I’m used to the Express working heel. It gets a little crazy early with a standoff on the floor but settles down rather quickly. The Express worked the majority of the match, making good tags while they were on the offense and selling well while the Samoans were on offense. Two of the Samoans were in white and one was in black but it was never said who was who and to be quite honest, I couldn’t tell because all three had shoulder-length stringy hair. Eaton takes a crazy bump on the concrete that was proceeded by a double crotching, courtesy of the Samoans, on the metal guardrail. The crowd was hot for most of this but went into a frenetic frenzy when Doc was tagged in and cleaned house. He muscled up a Samoan who landed in an awkward position and just thoroughly abused the other two opponents. After messing up a simple neckbreaker, Lane went for a karate kick but, in a weird moment, I clearly saw Fatu (I think) completely bail on the move. Finish was a bit sloppy with all six guys brawling as Cornette, who I met in Indianapolis at a recent ROH show, whacked Humperdink with the racket. Lane gets thrown into Cornette and pinned as the Samoans get the win. If Lane’s spots at the end had come off a bit cleaner, this would’ve gotten a better score.
Posted by Adam at 12:00 AM