Creepier by the Dozen #11 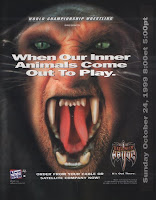 Looking through the Havoc ’99 card, this sounded like the most formidable match to review from that show. Well, I was wrong. Page was playing heel here, not sure why. Lame brawling down the aisleway into the stands. Even worse when they start fighting up the bleachers and such. The only people in the entire arena who are even remotely vocal are the people that are in the area of the brawl. Back to the ring area and Flair gets busted open taking a header into the guardrail. Then they do some pointless stuff on the announce table and get back in the ring. Remainder of the match is Flair and Page, looking old and worn, not doing a damn thing except sucking wind. Flair teases a win with the figure four but to no avail. Page hits a Diamond Cutter and the referee screws up the count. He counts two, stops, and then signals for the bell. What the fuck? Afterwards, Page gives the ref a Diamond Cutter, Kimberly steals David Flair’s crowbar, DDP whacks Ric in the nuts with it and give David a Diamond Cutter. Ric does a stretcher job only to be attacked by the Filthy Animals in the back. I have no idea what the hell is going on. Awful, just awful.
Posted by Adam at 12:00 AM