Here's a piece I abandoned a few weeks ago before I moved but wanted to share it in its inchoate state. 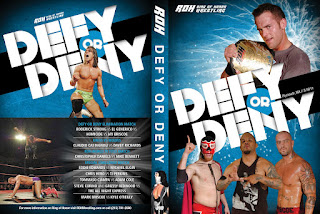 We didn't land on Plymouth, Mass -- it landed on .. oh, wrong oratory. Picked the most milquetoast ROH show from 2011 I could find. Just a mood.

Show starts with a Mike Bennett promo in-ring. Eventually everybody soured on his shtick but he had some charisma here, adds a little flourish of personality to the oft times flavorless ROH house show. Steve Corino comes out looking like a sixth grade kids' football coach, wearing ADIDAS track pants and gray cutoff shirt, his flabby arms looking like Gabourey Sidibe's dunked in non-dairy creamer. This shouldn’t have gone 12 minutes.

Mark jerking curtain while his brother headlines. Kyle's gear looks like '93 Minnesota Timberwolves stuff. Maybe he's a Marlon Maxey fan. Nice missile dropkick off the apron by O'Reilly. Story of match was Briscoe "big brothering" him. This was almost 11 years ago now -- not the same KOR that regularly main events NXT shows nowadays, and Briscoe, who at 17 was wrestling at CZW shows, could now make the new young boy earn his keep. Finish was a powerbomb followed by the Froggy 'Bo.

2. All Night Express vs. Grizzly Redwood and Steve Corino - 5

Mix of shticks here. Seem to recall after a few years together ANX exceeded expectations and got pretty good. Alert the authorities: Corino threw a dropkick. Nice sequence of combo offense by ANX looked like a Streets of Rage combo melee. This almost had a bit of Southern tag charm which helped calcify it as fresh compared to the staid environment many Ring or Honor shows I attended often had.
Posted by Brian at 2:39 PM No comments: