Creepier by the Dozen #2 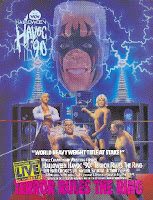 Strange to see Flair stuck on the undercard of a major pay-per-view during this period. Crowd had a miniscule “We want Flair” chant going during the opening minutes that Arn worked with Simmons. Reed and Flair tag in and Reed gets a nice punch combo off on Flair. Look out Glass Joe, I hear Reed’s left hook is deadly. Punch-Out references aside, this match failed to get out of second gear. I think mostly because the crowd seemed confused about who to cheer for. They would pop for Flair & Arn at odd sections and then later on, do the same for Doom. Nice section where Simmons chases Flair up the ramp after no-selling some chops. Flair & Arn were doing their heel work, such as when Arn was giving Flair extra leverage in a figure four. I wasn’t buying Simmons as the face in peril. Hot tag to Reed fires up the crowd and he gets a few moves in. Finish became sloppy with all four guys brawling in and out of the ring. Couple nice nearfall segments though, including Reed almost killing himself on a shoulder tackle from the top rope. Arn hooked a nice DDT for a really close nearfall but ultimately all four started fighting outside the ring and through the crowd for a double count-out. The end was a little hotter than the rest of the match but the double count-out killed it. Also, why did Flair and Arn immediately stop throwing punches and go to the back when the bell rang?
Posted by Adam at 12:00 AM