Creepier by the Dozen #12 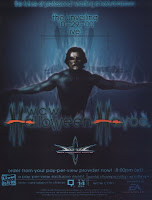 (NOTE: This review is copied and pasted from my gigantic review of Halloween Havoc 2000 I did about two years ago when we first opened the blog. I would've gone back and reviewed it again but I realized that I pretty much covered this from top to bottom the first time. So enjoy!)

Sting comes in and beats the piss out of Jarrett. A fake 80’s Sting comes out and the real Sting bails to destroy him. A death drop on the stage diposes of the fake Sting and Jarrett runs up from behind to commence a crowd brawl. Another fake Sting comes through the crowd and attacks the real one. This one looks stupid and is disposed of the same way the other fake Sting was from the real Sting. Confused yet? I sure am. Jarrett takes a hiatus while Sting beats up the impostors. Sting goes back to whip up on Jarrett and a Wolfpac Sting comes out. Another death drop on the stage and a third one is sent packing. There must be something magical about doing a death drop on the stage. Jarrett finally gets some offense via the bat that Wolfpac Sting brought with him. Sting makes a comeback and then another fake Sting comes out from under the ring to pull the real Sting under the ring. One bad blade job later and this fourth fake Sting is disposed of over the top. Moments later, another Sting comes from the ceiling and his fucking wig falls off whilst getting destroyed. Real Sting puts shitty fake Sting through the table and damn near takes out Schiavone. Great, take out the one announcer who’s actually worth a damn. Sting comes back to beat up Jarrett some more and then gets taken out by a guitar shot from the Sting that came out from under the ring. Real Sting is pissed and death drops fake Sting and Jarrett wins after a guitar shot. THIS WAS ONE OF THE WORST MATCHES IN HISTORY!!!
Posted by Adam at 12:00 AM