I'm going to see Dragon Gate live for the first time tomorrow and figured to better be prepared for this momentous live experience I should watch their biggest show to date from this year. Let's wake our eyes and watch!:

This was a fun opener, I'd never seen Syachioko before but loved his oddball shtick, all the weird gesticulations, etc. This was on the shorter end of things but flew by thanks in part to its fast-paced nature. Takuya's match-ending crucifix powerbomb was tangy.

Match starts with Fujii and Tanizaki doing an ECW crowd brawl up into the stands. Metal Warrior's costume looks like a cheap K-Mart Halloween outfit (speaking of, what are you guys going as this year? I think I'll be Abismo Negro). Arai has the wiry frame of a meth-head just give him some neck tattoos and he'd fit right in at one of Jesse Pinkman's house parties. Maybe Metal Warrior should get Metal Master's phone number? Arai does a sweet double-foot stomp where he stands on Fujii's shoulders (who's sitting on the top turnbuckle) and plunges off. Tanizaki hit the Implant on Arai for a good nearfall that Don broke. Warrior kicked out of Fujii's Nodowa Otoshi so Don put that metal-faced punk down for good with the Nodowa Elbow (and I choked a bit on my vegetable beef soup).

Before Kanda gets down the aisle Yokosuka jumps all over him beating him with a blue box with some duct tape on it. Can someone please explain to be the appeal/backstory of the blue box of doom? I see it all the time when I catch Dragon Gate shows but am at a loss to its significance. Kanda's cockiness could prove to be his downfall with nonchalant pin attempts, etc. Susumu's purple highlights in his hair beg me to ask if he gets his nails done at the same place? In most places an Exploder suplex from the top would end a match but not here. Not even close. Elements of overkill like that were a detriment. We got some unneeded interference in the last act including the return of Metal Warrior who did his best Jarrett impression with a guitar shot which lead to Kanda hitting his finisher Ryu's to end this.

PAC snaps the top rope after only about a minute of action. Doi dominates for a large portion starting early. I'd never seen Naruki's Bosou Elbow off of the top but it was awesome. You have to love it when someone gets hit and blood flies onto the camera's lens. We've got a ref bump! Doi brought a chair in and not to give PAC a place to rest. PAC got the victory with British Airways. Decent bout, they worked it like they were going on last, but there's still a lot of wrestling to go, and the transition from Doi's control segment to PAC rallying was distrait at best.

For a long time RVD was known as the guy with flashy kicks that often errantly drilled people right in the face -- now that honor belongs to BxB Hulk. Hulk did a grimacing facial at one point that was so tight and contorted it looked like that stupid mask they put William Dafoe in on that crappy movie Spider-Man. Saito gave BxB a sick belly-to-belly release suplex into the turnbuckles. Some sloppiness abound. One thing you can say about Genki (well, besides he's ugly as a dead dog's ass) is he knows a thing or two about backslides. 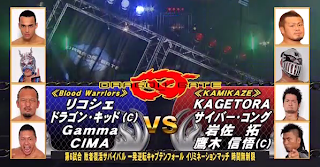 CIMA is eliminated very early with a roll-up which shocked him, his partners, the crowd, and myself. Forget Survivor Series this is how you do team-based combat! I'm digging Shingo's new John Waters mustache. The way this works, as far as I can tell, is the only way to lose is for your team's captain to be beat. However, if another member of your squad gets eliminated, they have to sit out until you eliminate someone from the other team thus allowing your partner permission to return. Does that make sense? Oh, and being tossed over the top rope (a la a battle royal) counts as an elimination, too. Whew! Gamma selling looks like Edwin Tobergta humping an inflatable pool raft. A lot of people have jumped on the Ricochet bandwagon but this was the first time he really impressed me. His double rotation moonsault is one of the coolest aerial spots (possibly ever). The Blood WARRIORS eventually had it until it was 4-on-1 versus Takagi but finishing off Shingo wasn't going to be an easy feat. Takagi battled back the imposing army and actually won it all crushing Dragon Kid (and his squad's hopes) with the Last Falconry. Great match.

Mochizuki is like a fine wine that gets better with age. For a match that approaches 30 min. in DG you may be surprised that this was mostly technical, grappling for position, back-and-forth grinding, etc. YAMOTO's hair has not quite gotten to Clay Guida levels, maybe closer to Gabe Nevins' in Paranoid Park. If YAMOTO keeps eating kicks he's going to end up looking like a topping on the pizza they found in Test's apartment when they exhumed his corpse from the couch. This felt like a main event boxing match -- just a war of attrition. The attenuation and enfeebling of each other's limbs and offense was expert. My only wish is had Masaki's Sankakugeri to the Face finish have looked sicker it'd have been a finish to make you leap out of your chair but as it was not quite fireworks.
Posted by Brian at 12:00 AM

Thanks, man! I can't wait to see the Captain's Match live tomm. too! I just need to bring a blue box to beat people with.