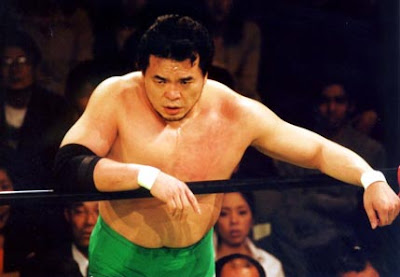 Adam:
Mitshuaru Misawa, a legend in the Japanese wrestling scene, and the founder and president of Pro Wrestling NOAH, was pronounced dead today after taking a back suplex during a match in Hiroshima, Japan. The match was Akitoshi Saito & Bison Smith vs. Misawa & Go Shiozaki, during which Saito gave Misawa a back suplex that knocked him unconscious. Misawa's heart stopped beating and he turned purple in the ring. He was immediately rushed to the hospital and was pronounced dead roughly an hour later at 10:10 PM. The cause of death is currently being stated as a heart attack but details are still sketchy at this point.

On a personal note, this is beyond compare with any of the untimely deaths in wrestling over the last few years. I myself was introduced to Misawa's work by watching NOAH tapes and DVDs. Misawa will truly be missed to many puro fans who admire his work and dedication. I will miss the stiff, wild matches that I've come to expect from him, especially the hard hitting battles with Kobashi and Morishima. I, and the fellow writers and fans here at NHO, will pay tribute by watching copious amounts of his work and praising it as such.

Brian:
I'm terribly shocked and saddened by this news. The loss of life, of course, is tragic and heartbreaking; also, this could spell the end of Pro Wrestling NOAH who has already in '09 lost their TV deal, seen attendance dwindle, and now losing their beloved leader. I drove nine-hours from Cincinnati to Philadelphia to see Misawa when ROH brought him in back in '07. I'll pay memorial the only way I know how, here thousands of miles away, by getting together with some friends and fellow fans and watching a couple discs worth of his phenomenal work.
Jessie:
My first memory of Misawa was from high school, in between watching and performing our own backyard matches, acquiring and studying wrestling tapes was a major source of our time, mostly coming from large, abundant orders Brian would place with RF video. I remember cueing up a "best of" video which featured matches with his biggest rival from the early 90's, Toshiaki Kawada, a brutal, stiff kicker who had no remorse for hurting the hero in green and white. The level of dangerous moves these two did to each other was almost unfathomable to us at that time; little did we know that was a staple in the puro world of All Japan Pro Wrestling. Over the years, we'd followed Misawa, along with dozens of other Japanese wrestlers as best we could, ordering new tapes every so often, reading the dirt sheets, internet reports and so forth. NOAH was real big with me when it was formed, I used to order every big show that came out in the early days, the double cassette tape set version. We had found a new Puro fed to love and adore, and Misawa was the man behind it all.

When I think of Misawa, i undoubtedly think back to our road trip to see the legend live and in person. Back in late '07, it was announced Misawa would be making his American debut in Ring of Honor in Philadelphia. Merely being a 9 hour drive, the plans were laid to make the journey for what would surely be a once in a lifetime chance to see Misawa live and in person. I had doubts about making the trip; my wife was already 7 months pregnant with our daughter, and leaving her home alone for a day and half was something that weighed heavily on my mind. I backed out of the show, thinking staying at home would be best for her, if anything were to happen while I was away, how could i forgive myself? But, literally minutes before Brian and Didge were to leave, I got it in my head that I needed to see this show and with the blessings of my very generous wife, I made the call and got myself on the road to Philly. I had worked 14 hours that day, at both of my jobs so I was completely exhausted, not realizing how I would make it through the 9 hour drive to the show. Luckily we were all in such high spirits, our excitement carried us most of the way there. Upon hitting Friday morning Philly traffic, all of us were completely pooped, ready to nap right there in the car as I made my best sounding sick voice on the phone to my boss, getting out of work that day. Brian stretched out in the backseat from stiffness and Didge moaned about nagging injuries and having driven the whole stretch of road, with only a few stops. I was feeling it too, nearly delirious, somehow we made it in to town, and caught a glimpse of a Target store, apparently a preferable place of employment for former ECW champions, we joked. We told ourselves the first hotel we see, we're stopping. We made our way through amicable downtown traffic until Didge spotted a sign to lift our spirits: a lonly two story hotel strangely sitting on the side of the road like a dead possum. The obviously old paint job was shining so brightly though we knew this was our place: Green and White, the colors of Misawa were the same colors of this shabby motel, so we promptly stopped, payed the overpriced fee, cranked up the AC and got a good 6 hours of sleep.

We killed time around Philly waiting for the show, going to the local supermarket for some various colored streamers to throw at the Japanese competitors, eating at overpriced and underflavored sports bar, Chickie & Pete's and driving through the scenic neighborhood around the arena. I won't go into detail on the show as a whole, as the real reason we were there was to watch a legend; his famous music hit, green and white banners were staged at the entranceway and lights and streamers were shooting everywhere as the weary, battle-tested warrior came down the aisle with that pompous-looking jacket. He barely made any kind of expression, as per usual, but his work that night was as solid as ever, going to a 30 minute broadway in a tag match. He got a standing ovation afterwards, as did all the competitors and it felt like he was a little embarrassed by such a reception. On his exit out, we decided to give him our thanks with a heartfelt backslap, hard and stiff on the shoulder; he barely noticed it but we won't ever forget it. We remarked that night at a wonderful diner about the experience and I'm terribly glad I went and got to see this legend in person because now that opportunity won't ever come again.

His death is sad, and unfortunate, many people are saying he got to die in the middle of the ring, doing what he loved most in the world, and while it is poetic and quite possibly a much better demise than what could have ultimately befallen such a great man, I won't really comment on my feelings towards how he left this earth because we wouldn't really know if that is how he would have wanted it to end. I know all the wrestlers there, the crew, fans in the arena especially were bear witness to a horrible sight, a deeply sad one and I feel for them having to have seen it. I know fans around the world are also affected by Misawa's death; he was always seen as a tougher than nails guy, a great technician, and a hero, champion babyface for his whole extensive career. I am very saddened, as most are in the wrestling community by such an incident and my prayers go out to his friends and family.

I also think this an appropriate time to make a comment, hopefully this isn't taken in a negative light, but I see this as a clear message as well to some competitors out there. Misawa was nearly 48 years old, had a long, storied career where he had taken countless brutal moves onto his neck, head, and shoulder areas just as the final one he took on Friday night. While it's not scientifically proven this same thing could happen to every other wrestler who's getting up there in age, it's a sure possibility. The first guy that comes to mind to me is Kenta Kobashi, who has just survived removing a brain tumor and who's knees are completely shot, among countless other injuries. Not to mention the innumerable devastating moves he's suffered to those same areas over the years. I really think some men need to call it a career and not risk something this tragic befalling them. As much as me, just like every other die hard wrestling fan out there, loves to watch these great performers still go out there and do what they do best, I would rather not see this happen to another beloved performer, or any performer for that matter.

rest in peace, misawa, mitsuharu. You will be missed.
Posted by Adam at 1:32 PM