TNA One Night Only: Knockout Knockdowns 2 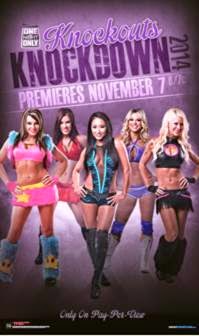 8 Knockouts versus 8 outsiders. The winners advance to a gauntlet finale. I'll be reviewing sans pants.

I've enjoyed Veda in her various ROH roles and having her pair off with Gail Kim was an inspired choice. Scott worked quirky librarian until the bell rang then pounced revealing the guise. Don't think they'd ever worked together previously and there was some less than flawless figuring out of spots but call it bias I tossed this an extra point. I was excited by the match-up and it was a good opener. Scarlett is working a drunk party girl gimmick complete with red plastic cup. This was pretty one note, some interference stuff with Velvet at ringside, lots of Angelina stomps, but nothing worth noting. Scarlett has a marketable look and did well in her backstage promo so I'm surprised TNA hasn't offered her a contract. Too bad Cute Kip wasn't in attendance to do a Beautiful People reunion. Reby's married to Matt Hardy so we know at least one thing: she doesn't mind spare tires.

One of the first looks at Havoc as the new monster of the division. Rayne played a nice Krystalak to her Godzilla (come on I know you guys got Unleashed on your DS). Karlee was actually in WWE for 3 years under the name Maxine but don't feel bad if you've already forgotten her. Her father doesn't. Taryn's sort of diving RKO variation came off faker than her wedding vowels to Drew McIntyre. Next match was actually quite good and worked more competitively than anything else thus far. Knocked off a point for one striking sequence where Yim looked like she was working at quarter-speed and for Brittany being more vanilla than those wafer cookies in your grandma's pantry.

Deonna working painfully shy girl gimmick. For Hooters Girls gone legit Brooke is no Yurizan Beltran but she actually put forth some effort pre-match to play a heel role buy dumping on her opponent and the crowd. This was a bit lost with Brooke leading and some shoddy work therein such as Brooke's attempt to cheat using the ropes for leverage on a pinfall which was so apparent Geoffrey Gurrumul Yunupingu could have seen it. Marti Belle I dig, she was good in an opening in-ring bit with Rockstar Spud, but man did she ever draw the short straw getting booked with ODB. Belle made ODB's repugnant offense look better than its ever had. Spud's got some of the best facial expressions around. Spud gets stripped down to his shit-stained undies (no I'm not kidding) and spanked mid-ring.

Better than the '99 Royal Rumble. Pretty smartly laid out and when it came down to the final two (Madison and Angelina) it reverted to pinfall or submission. This match within a match was quite good with some good teases. The tired botch interference with the hairspray by Velvet was insipid and uninspired but the hot finishing stretch bolstered this enough to be the only thing off this show to land in the vaunted NHO recommended category.
Posted by Brian at 12:03 PM