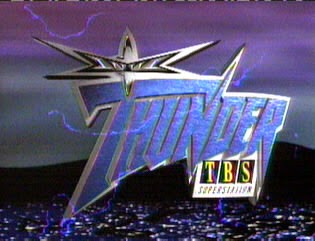 The regime of Ric Flair and his cronies is in full swing. What will happen this week on Thunder as we start setting the direction for SuperBrawl!

First match was pretty much a squash if nothing else but it got points for Steiner’s brutality. Kwee Wee got destroyed with an unnecessarily stiff assortment of suplexes and clotheslines, including one exceptionally nasty suplex that nearly broke his neck. Top rope bulldog from Steiner polished this off in short order. First few minutes of the hardcore match was fun with them trading chair shots and brawling at the announce table. Inexplicably, Bigelow decides then to start working over Meng’s knee for the remainder of the match and disregarding all weapons. I guess that’s a sound strategy as if you can’t stand, you can’t waffle someone with a waffle iron. Ending wasn’t much except Meng jumping off the top rope and hitting a fucking FROG SPLASH! Damn, what’s gotten into Meng?

Smiley and Harris was a nothing match. The whole story was the announcers building up a neck injury that Don Harris had and how they can’t do the old switcheroo trick since one has a neck brace on. Norman hit a few nice armdrags as the crowd audibly chanted “bor-ing” to which Schiavone claimed they were chanting “Nor-man”. Harris Brothers switch off and get the win as Norman looks to heavens for Glacier to come save him afterwards. Yep, I’m just as confused as you are right now. Tag match was set up at the beginning of the show during a Cat promo. Right at the beginning, Adams hit this wacky gorilla press into a stiff looking ribbreaker type manuever. Luger and Bagwell were doing nothing but cruising through this as there wasn’t much to get excited about. The middle seemed like they were just killing time until the run-in finish with Jeff Jarrett knocking out Clark with the guitar. Why? I have no idea.

More of the Filthy Animals/Team Canada feud that seems like it’s never, ever going to end. Running shooting star press of the apron by Kidman was nice but also comes across as idiotic as I’m not sure that it was a smart thing to do by someone with busted up ribs. Awesome shows hes not the dumbest tool in the shed by working over Kidman’s ribs consistently. Ending had a nice chain of nearfalls but would have probably worked better had there not been an eternity in between each one. Liked the Awesome Bomb at the end that just ruined Kidman. Chavo and Rection was a tepid battle between two former Misfits in Action colleagues. Rection charged the ring at the get-go like it was last call at Golden Corral and Chavo just bailed. Guess he didn’t want to be a part of the never ending buffet special. For a grudge match, you’d think this would have a lot of heat but a big nearfall spot by Chavo off a DDT didn’t elicit anything but golf clap from someone up in the cheap seats. Seriously, my high school study hall was livelier than this. Wall comes out at the end to supposedly root on Rection but quickly turns and chokeslams Rection off the second rope in a heel turn that my two year old son could have figured out.

Main event time and I never understood why main events for wrestling shows were made during the show. This one was made about 45 minutes ago. Eight minutes left in the shows and do these two really need to trade lame verbal barbs on the mic? Lots of kicking and punching by Jarrett, like he was being controlled in a video game by someone who doesn’t know how to power grapple and was just mashing buttons. Jarrett working the sleeper and Page frantically wailing about to get out of it didn’t do it for me at all. Just when I thought we might get a main event with no interference, we get a cavalcade of people running out for no apparent reason and presenting a lame brawl to close out the show.