I typically wouldn't write anything on essentially a "talk show", but since this is the first of its kind UFC has produced, and since nobody gets Fuel, and I'm an MMA fanatic, I felt like I'd talk real quick about the debut episode. Dana White opens talking about how excited they are to finally be doing their show their way. Program looks very good in HD, nice graphics, sound quality could use improvement (Florian's mic levels were off), but overall presentation a "B+".

The hosts are Kenny Florian and Todd Harris (former WEC commentator -- glad he didn't have to get a job at Popeye's Chicken & Biscuits). Clips of Overeem punishing Lesnar. I called the result of that fight from day one -- first round KO FTW! I mean, come on, Alistair's been undefeated since Nov. '07 and I've seen all his K-1 and DREAM fights. K Flo talks about dissapointment in Brock saying, "hopefully he didn't just go out there to collect the pay check". Ouch! Cerrone vs. Diaz a fight of the year candidate? Great war, but not in my opinion, too one-sided with Nate breaking the UFC record of most significant strikes landed with 238. KO of the week? Hendricks KO'ing Fitch in 12 sec. Loved that shit. Big Hendricks fan, dig the WEC guys, plus he's got an epic beard like me and that's bonus points. They bring in Dana and go over UFC 141 again.

UFC 101 is next and why does absolutely every MMA show have one of these "how to" segments (I can think of three others besides this one). Dan Henderson beats up dough boy Jay Glazer. Ariel Helwani up next discusses error of Cerrone's ways fighting 6x in 2011 and gives the scoop Aldo has brought in Maynard to help train for his headlining Brazilian fight with Mendes at UFC 142. Can't wait for that!

Chael's Corner is up next and this is why you need to watch this show every fucking week! He gives out gifts to some fighters: 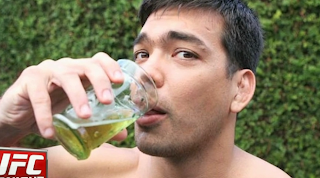 Listerine for Machida since he drinks his piss every morning! I loved bugging NHO writer Jessie's cousin Chris, a huge Machida mark, about his urine drinking back when he was relevant. 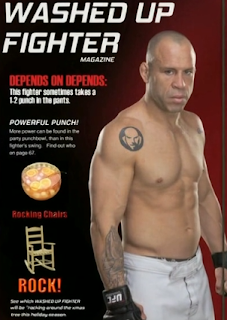 A subscription to Washed Up Fighters Magazine for Wanderlai! Great stuff. I won't spoil the rest but watch the show and see them. Chael goes on to say after beating Munoz he's cashing in his title shot not at Anderson but either GSP or Jones.

Speaking of Jones, the hosts award him with Fighter of the Year for his four devastating finishes in '11 and Hendo vs. Rua as Fight of the Year. Good first episode and think the show will only get better. Find a way to see it!
Posted by Brian at 12:47 PM