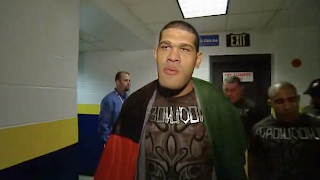 Strikeforce went head-to-head with UFC with duel shows and Strikeforce was easily the victor tonight. Opener stunk, the show was marred with last minute changes, so Radach took the fight on a week's notice and OSP just fought less than two weeks ago. I've never seen someone get pounded non-stop on the ground for three rounds but here it was; don't know who was the biggest loser, though, Benji for eating fifteen minutes of unprotected shots to the side and back of his head, Ovince for never just finishing the damn thing, or the referee for not throwing this fight out. Next fight was the opposite, fireworks fast and early, and not a lot of wasted time. Kyle also took his fight on a week's notice, guy's an unbeaten upstart rising from obscurity to go 6-0 in the co. and was game here. He knocked Silva's giant, goofy ass on his butt with the first shot and pounded on him for the rest of the round. Second round, roles shifted, and "Bigfoot" gave Kyle an early bedtime. 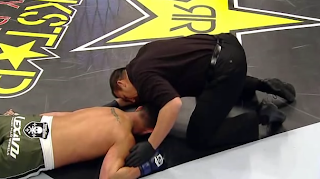 Next two fights saw consecutive knockouts that easily rival anything else in the world I've seen in '10 for KO of the year. Lawler just violently obliterated Lindland, leaving the veteran lifeless on the ground in a scary moment. The result wasn't surprising but still startling. Then, the very next fight, former UFC star Daley brutally knocked out Scott Smith with one of the hardest shots I've ever seen a man take in the face. Smith fell like the proverbial ton of bricks face-first into the canvas with a resounding thud. This was the type of knockout you'll only ever see once or twice every half-dozen years. 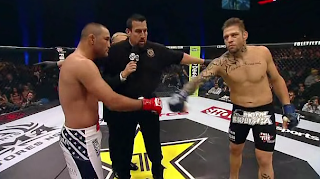 Well, after writing that last paragraph I was ready to watch the main event and guess what? Brutal fucking knockout! Some of the gnarliest ground and pound you'll ever see. Henderson was beating Sobral's face into mush like he kidnapped his firstborn. If you're into awesome finishes, and what MMA fan isn't, then this is definitely your show and as far as most explosive endings goes it ranks up pretty highly on any all-time list, too.
Posted by Brian at 12:00 AM