This was shot in what looked like either someone's backyard out in the country or in a public park in autumn. The opener just kicked ass and really set a precedent I don't see being topped. A lot of death match tournament matches are hackneyed pieces of shit that see two out of shape guys waddling from one messy spot or garbage bump to the next in a pathetic excuse for quality wrestling. This just felt like a fucking alley fight, though, as both guys were mean as hell. Havoc I don't remember having such amazing punches but he throws a couple hard jabs and straight rights that were completely legit and gross. Sami is a bastard, stuffing glass in Danny's mouth, and just torturing him throughout. The outdoors actually provides a nice change of scenery, the acoustics are good with everything hitting with resounding thuds and smacks, lending more to the legitimacy. At one point Havoc didn't sell a bump and started shaking the ropes a la Ultimate Warrior but outside of that everything in this was crucial and worth scoping out. Havoc took a giant bump off of the top onto a metal and light tube structure that was held together by barbwire. 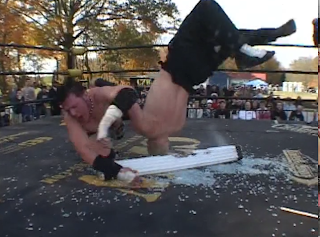 Havoc ate the finish headfirst -- I mean literally, he landed right on top of his fucking head so awkwardly it made Adam's first date look poised in comparison. 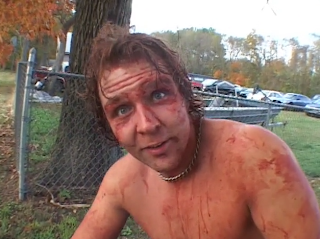 Thumbtack Jack and Moxley was also really good. They did all the old school dog collar spots the best I've seen them since Valentine vs. Piper, plus, added in all sorts of hardcore violence including bumps into Legos, Jon having a cheap Halloween mask stapled to his face, and Jack sticking hypodermic needles into Moxley's cranium. The finish was absolutely brilliant, too; Moxley had his hands bound and was defenseless, right as Jack was about to drop a cinder block onto his head Jon started screaming "I quit!" like a pussy and it was fantastic crybaby heel for a new era. Next match killed all that momentum dead. These two had a slow, sluggish brawl, MASADA attempted an eyesore hurricanrana, Damage throw a few punches that whiffed, etc. 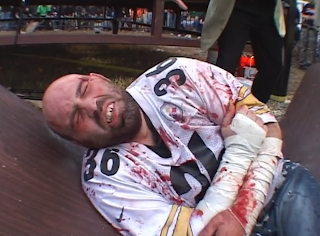 Next match felt like a masturbatory stunt show and far from a wrestling bout. This isn't the sort of thing you'd want to use as an intro to CZW if you were trying to convince someone to see the light. Zandig versus Gage, just two overweight, meth-addled, grumpy guys leisurely throwing each other into glass structures. It literally felt like they were just taking turns doing shit. There were some gnarly bumps, Zandig appeared to really be into eating a lot of his tits-first which was something different. 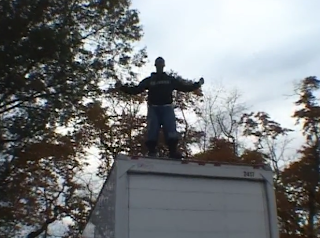 It wouldn't be a major CZW show without some idiot leaping off of a truck. A spotty three-way, save for some of Vortekz's kicks, this was fairily awful. They tried to do some faster paced, trickier exchanges early a la Guerrero/Malenko but the execution was worse than the last pained Mel Gibson film. Excellent has always struck me as what is exactly wrong with indy wrestling and Swann working in a hoodie (I assume to avoid contact with any glass or other debris) made him look like a bitch.

The semifinals had more big bumps and bloodletting but the magic had begun to fizzle out. Sami and Jack exhibited more heart, for whatever sick, disturbed reason, this is where they belonged, and like a college sophomore experimenting with their sexuality with a close friend because they've already got a bond, both guys seemed to relish conducting a scar sonata on each other's body in a mutual scarification ritual. MASADA and Gage was more or less two unruly, filthy guys you'd likely fine facsimiles of in a local alley or truck stop bludgeoning each other with various bat-like objects. In this sordid home run derby, if Gage was Albert Belle than MASADA played a nice Carlton Fisk. 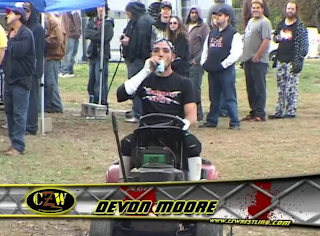 I guess I'll give xOMGx one thing -- he's the only dude I've ever heard come to the ring to ska music. He brings a flimsy barbwire board to ringside that looks like it was crudely constructed in his grandfather's garage at 2AM the night before. I wonder if he found the old man's stash of porn magazines underneath the old gas cans and vacuum cleaner parts. Moore's K-Mart basketball shorts get ruined in the barbwire early making that week's allowance a waste. I wonder if Nowinski has got Devon to agree to donate his brain to science yet as he ate some unprotected chair shots like Nick Gage would be eating some fat girl in the crowd's rancid pussy that night. xOMGx and his neon green mask and gear fits in about as well here as Moore would at a five-star restaurant. "Can I get a spot by the window?" he'd ask, "Sir, you need a jacket to dine at our establishment" the man at the front would say, "What, this '96 Charlotte Hornets Starter jacket doesn't suffice motherfucker?" he'd grumble as he left for another dinner at McDonald's instead. I hear he's a Big and Tasty guy (extra lettuce). 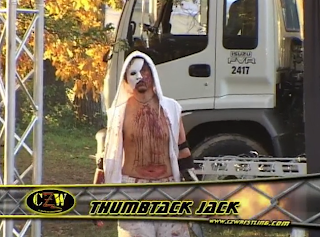 Look at Thumbtack Jack on his way to the ring -- that shit's scarier than any horror movie I've seen in years. Nowadays the dude can't walk thanks to doing far too many ridiculous bumps in his short-lived but curiously fascinating career. Has a dueling chair spot ever worked? Well, besides that one surveillance camera video of those two high school students I saw. I can't believe that little preppy bastard no sold such an obviously epic chair shot. Never realized how great Jack was at vocal selling. I wonder what the workers got more that night: concussions or venereal diseases? I'm guessing neither were entirely unwelcome. 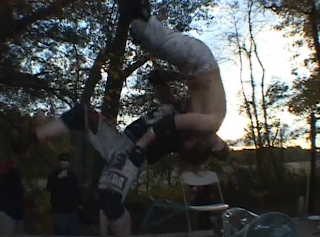 This picture is MASADA hitting a brainbuster on Jack on-top of a wooden stage used for the stationary cam. Excellent moment. I think it was around then that I sought for a change of pants. There's something exciting about seeing two guys hurt each other to this extent and it all being legal. It feels like somebody should be arrested somewhere for this. 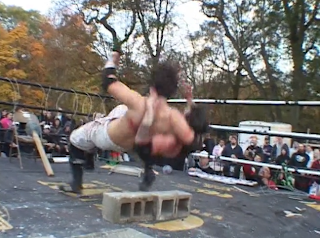 Jack takes cinder block bumps and of course it's painful-looking and really cool. MASADA would have been the fucking man if the original ECW was still around. If Dynamite Kid saw this match I believe he'd be able to stand up out of his wheelchair for the first time in a decade. Then he'd jump off the nearest cliff. This was definitely a suitable finale as these guys go beyond the usual CZW zeitgeist into an even further realm of savagery. 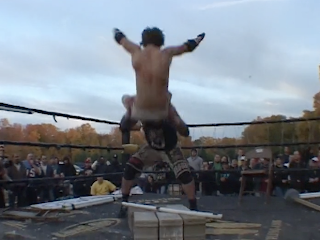 I haven't seen this many cinder blocks explode since that horrific accident at Home Depot a few years ago, and to think, all that old man wanted was a new sink fixture. Wait -- isn't MASADA the guy that broke Jack's neck earlier this year or am I wrong? Man, probably payback for Jack sticking all those damn hypodermic needles into his skull during this bout. Not to be outdone, MASADA then made Jack look like Pinhead... 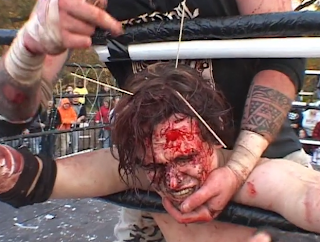 One of the sickest things I've ever seen in a wrestling match (and that covers so much ground): MASADA pierces a hypodermic needle into Jack's right cheek, through his mouth, and then out of his left check as pink fluid squirts out onto the camera. Offhand, I can't think of a better finals to a death match tournament. 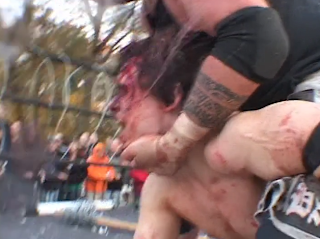 This is like looking at bad abstract art. You stare and squint and try to make it appear more than just meaningless abstractions and look for something deeper, more personal, but in the end it's usually just a maligned mess. I'd be more interested in a reading an ethnography study published on the sick creeps who actually attended this show in the woods.
Posted by Brian at 4:06 PM