Ring of Honor's biggest event of the year comes by way of iPPV (and later DVD) from New York City. 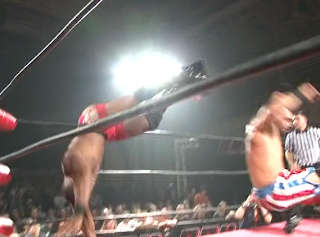 Scary botch in the opener where Jay held King precariously and tried to flip him over his head into the turnbuckles but Kenny instead nosedived straight to the mat in a heap (see the included image) which elicited a "You killed Kenny!" chant. Physical stuff, a hot crowd, and a believable, clean finish made this a nice way to kick the show off. Where Jay is measured Mark is more chaotic and I've always preferred him, he showcases his wilder side here, including a rolling senton off the top to the floor that saw him land tailbone first on the ground. Mark's "Burning Hammer" to get the victory was brutal and a nice finish to a match that built upon the previous' intensity and crowd fervor.

Next up was the first tag encounter of the evening and while it was mostly fun while it lasted it didn't ever reach a fever pitch. Ballz is just grotesque, Necro looks like a fool sans-hair, etc. The spot of the match saw Stevens press-slam Grizzly to the floor from in the ring and while flying in mid-air Necro, also out on the floor, punched Redwood in the face. 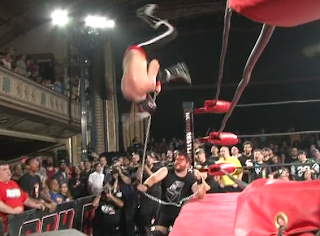 A nice dose of storytelling in the dog collar bout, we've got the magnanimous Generico, Cabana's idiosyncratic quirks silenced (for once!), Steen's ebullient asshole nature, and Cornio who, I've got say it, you're being extremely myopic if in 2010 you're still pedaling him as some lost "great" worker, combining in a wild fight which has finality as its cynosure. Generico eating his former partner's blood off of his mangled head makes sense, I guess? Maybe in some sick Alan Moore dystopian vision. Cornio's used to bleeding on tape, it's how he's bought his son Christmas presents for the last decade. 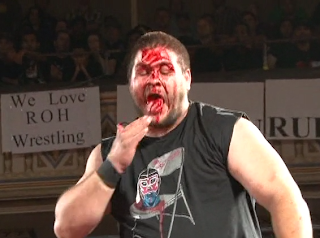 The post-match spectacle only adds to its score as it's a circus of disturbing visuals, Generico unmasked resembling an ersatz Andy Dick, Steen forcibly kissing Corino's teenaged son on the mouth, and Kevin, Steve, and son writing cryptic messages on a steel chair with Corino's forehead plasma.

Edwards has transformed into one of the guys I most look forward to watching in ROH. Daivari was tragically overlooked and underrated in TNA and fits in better here than other Orlando orphans like Sonjay and Petey did. A nice, basic match, with crisp execution (save for one botched leap frog spot) and nice selling (see Eddie's histrionics after a tornado DDT). I guess if Glory By Honor is ROH's answer to WrestleMania then this would be it's equivalent to Goldust vs. Maven.

Next an encounter between two consummate professionals. One, Aries, I like, had him in my top ten in the world in '09, which was an outstanding year for him, and then there's Daniels, who I've always looked at with a degree of equanimity. A few months ago former NHO employee Adam gave away hundreds of DVDs, including several bags full of commercial releases, one of which contained The Prophecy Foretold: The Best of Christopher Daniels which I started studying one night to reanalyze my somewhat timid position on his work. I found myself coming out of the viewing prepared to admit Daniels is a superb performer, great timing, positioning, execution, etc. While he's not this generation's Steamboat I think you could make a case for him being our Rick Martel and that's not too shabby. My favorite sequence saw Daniels attempt a Quebrada to the floor that Aries dodged, then Austin quickly slid into the ring, off of the opposite ropes, and dove out headfirst onto Chris with his pateneded Heat Seeking Missile dive. At one point after having Aries in a Koji Clutch some idiot in the crowd starting chanting "UFC! UFC!" Right, like anyone's ever pulled off that submission in an MMA fight! Maybe Rafael Dos Anjos will experiment with it in his next camp. 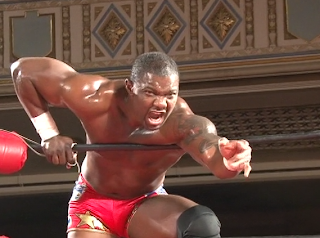 Tremendous crowd reactions elevated KoW vs. WGTT into the stuff hardcore wrestling fans dream of. For a guy who's watched way too much 1950's film in the last few months I felt as though Haas was channeling William Holden. A lot of athletic and physical moments highlighted this wrestling mosaic. Even though the finish felt cheap like a Sarasota hooker's murmuring of "I love you" while you check her prostate with your uncircumcised cock this is still one of the better American tag matches this decade. 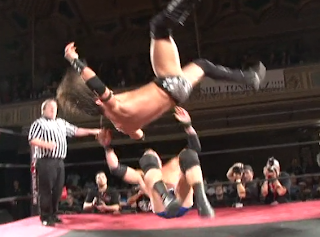 Wow, seeing Terry Funk at ringside for the main event, got me to thinking Tyler Black couldn't even wipe Funk's ass let alone perform on the top of a bill like he could. I never noticed before but Strong eats power stuff like suplexes and slams a lot like Terry Taylor, but facially sells pain in submissions more akin to Sunny Beach (or maybe Kuniaki Kobayashi minus the dazed eyes). I've never gotten the Tyler Black appeal, to me, he's a slightly better version of Sick Boy, and come to think of it, would have been a nice fit in Raven's Flock. I think the plain old dull babyface Strong (we'd all come to know and tolerate) making a run at the "sell out" champion would have been fantastic stuff, but this new Roderick, as part of Truth Martini's gang, seems about as conflicted as my feelings on the new season of The Office. Kevin Kelly making Willy Wonka references makes me regret this download. Seeing Martini, a guy who I used to watch wrestle with the likes of Pondo and Rotten right down the street from my house here in Fairfield, bumping for Funk was surreal. Strong winning the belt was a neat moment and the finish was fine save for Funk taking too long to hobble into position to make the count. 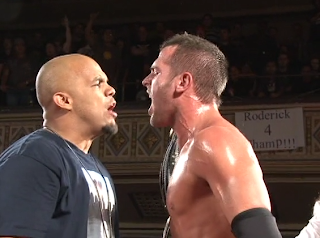 Overall, a really good show, offhand I'd say their best of '10, and a better option for your evening than watching Marmaduke or finding new ways to label and re-categorize your DVD collection a la Adam Sanders. Homicide's return post-match after the main gave me chills, too bad seeing him live in Dayton weeks later versus Kenny King failed to illicit the same reaction.
Posted by Brian at 9:49 PM

oh wow, i thoroughly enjoyed this review, from the discussion of William Holden (is the the guy that Marilyn Monroe blew in that homemade film?) to the comment about Black not being able to wipe Terry Funk's ass.....I do want badly to see that World's Greatest v. Kings match, glad it lives up.....great read....yes i think this is possibly your best of '10

Really enjoyed reading this. Kevin Steen looks brutal. Can't wait to watch it. The idea of screencaps is really cool, as well.