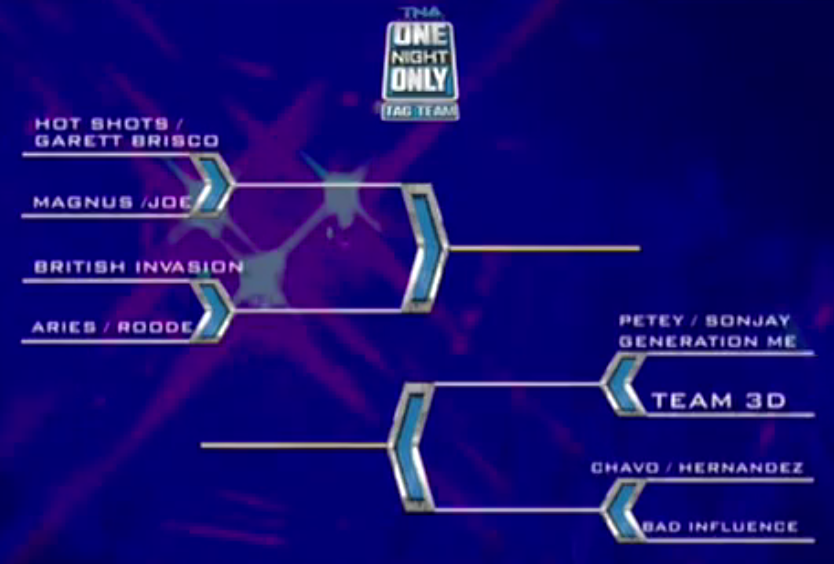 Liked the opener. Probably one of the better ONO matches yet. It's simple, not groundbreaking, and while these guys are all known for flashy pizzazz offense, this felt like an actual athletic contest with some good back-and-forth, a fine alienation segment on Max Buck, and plenty of fluid sequences. Next some TNA veterans (Cassidy Riley and Chase Stevens) versus some rookies (Garett Bischoff and Wes Brisco) in what on paper appears to be a match fit for a Hermie Sadler UWF mid-card. Riley has sad eyes. Garret tripped trying to get in position to take a Cassidy armdrag. While Stevens was cutting his teeth on the circuit little Garret was on the set of Ready to Rumble drinking Shirley Temples courtesy of daddy. Wes looked like he dipped his face in sulphuric acid as a kid. Guy in front row in Baja hoodie that resembles Terry Funk's pinstriped trunks. Match wasn't terrible but hard to buy the Aces' control segments as Bischoff is not believable on offense. I always liked Doug Williams and Aries' match at ROH Death Before Dishonor: Night 2 (2004) so cool to see them competing again. Another strong entry in this show with good structure, Doug got a nice stretch on offense, and teamwork seemed emphasized with some nice saves and double-teams. Rob Terry offered least to the proceedings having his sole highlight being spat on by Roode.

Watched the next match over two sittings so my thoughts are fragmented. I was surprised to see the faces go over. Chavo and Kaz did the weakest double-clothesline spot I've seen. I may be alone in thinking Chavo's TNA run was actually underrated. Magnus and Joe had a few borderline great bouts in NOAH (vs. Akiyama/Saito, KENTA/Maybach, etc.) but I found their TNA stint as a team unmemorable. Surprised the Aces ran so much offense considering they'd already had a match and their protracted leg work on Joe was insipid. Once the tide changed they put this to bed pretty suddenly. Team 3D is the last team to see action (at least inside the ring I can't vouch for backstage happenings) and they hop right in ready to get after it. Pretty straightforward affair, the Dudley's did show some ass, so that was cool seeing them eat some missile dropicks and whatnot, and Max Buck took a pretty nasty bump on a toss over the ropes to the floor where he collided with the apron like a hockey player getting checked into the boards.

Control segment on Magnus left him more isolated than Theodore in Her. Magnus is awfully in favor of Dixie Carter I'm wagering a guess he's trimmed her lawn both grass and pubes. Taz is a clown on commentary no surprise but I'd have loved to see him in his prime versus Aries. Brass knuckles shot gets them Dirty Heels the vociferous victory. D-Von in biker duds calls to mine Biker Boyz. Wonder who'll induct the Dudley Boyz into the WWE HoF? Speaking of hypothetical questions, wonder what would have happened if Aries wouldn't have flunked his WWE Tough Enough tryout? Would have loved watching Hugh Morris teach him the finer points of running the ropes. Heels versus heels final? All four guys are wearing all black making them darker than the stain on Yoel Romero's trunks at UFC Fight Night 35 (LOL). Bully Ray sells a fistdrop like a mix between Rod Price (the wrestler not Foghat guitarist) and Homer Simpson. More rule breaking spots than used condoms washed away by Hurricane Katrina. The brass knuckles come back to haunt Aries and he then eats a 3D like it was a baked potato with butter and sour cream. The crowd goes mild.
Posted by Brian at 4:24 PM