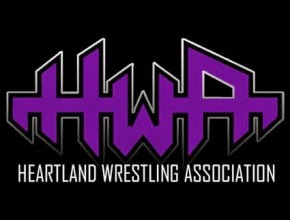 A while back I was at the local flea market and perusing through some old magazines that the wrestling booth had stacked in a box. It was there that I found the program for the 2000 Brian Pillman Memorial Show, a show which I had attended in high school with some friends. I paid the guy at the booth (who I must say looked strangely like Sgt. Ledbetter from this old DWA show we reviewed) and took my prize home. Thumbing through the program at home, I then realized I had a compilation on my hard drive of a old HWA tape with the best matches from the Pillman Memorials from 98-00. This is the review of said tape.

It’s really interesting to see people like Shark Boy early into their respective gimmicks and characters and see how far they’ve come. His ring attire looks like it was put together by a fifth grader for a Halloween costume contest at the local elementary school. Fairway did a completely nutty somersault over the top about five minutes in but beyond that, he attributed next to nothing aside from breaking up pinfall attempts. Tarek and Casey worked well as a team and put together some good double team moves including two double brainbusters and a wild springboard bulldog. The action here felt like it didn’t have a lot of forward momentum, just four guys trying to kill about 20 minutes before intermission. Tarek had absolutely one of the most glorious botches I’ve ever seen. He was attempting a springboard moonsault, slipped, got tangled in the ropes, and took a header to the floor. I’d look this up just to see that. Ending was typical with a brawl between everybody and Shark Boy coming off the top rop with a big dive for the win.

For two guys representing ECW I definitely expected more that this. Snow started off by doing impressions of both Sabu and Taz and then a bunch of stalling. Candido wasn’t far behind though, doing a spot where he got hip tossed by the ref, chasing him around the ring, and then later getting bodyslammed by him. Ten minutes into the match and there wasn’t any offense of note by anyone (including the ref) and they just seem to be on autopilot. Loved Candido’s sell of a facebusted by spinning around on the match and gyrating like he was trying to introduce a new breakdancing move. Couple good nearfalls toward the end by Candido off of both a suplerplex and a reversal of a dive by Snow. Sunny does a completely random run-in at the end, distracting Snow and somehow Candido still lost.

Judging by the previous two matches I wasn’t holding out much hope for this, however for a 12-minute match, this was quite good. Jericho came out rather conspicuously to Rush’s “Tom Sawyer”. I’m sure he was as just as confused as me as to why that song was chosen for him. The action flowed seamlessly with Jericho controlling the majority of the match. Benoit hit a vicious back suplex from the top rope that landed hard and folded up Jericho. Not too much out of the ordinary here, some good mat work and a quick pace, just as you would expect these two to have. Not sure if they were rushed for time or not but the finish seemed really sudden with Benoit reversing a Magistral cradle attempt into the crossface leading to Jericho tapping out. Can’t wholeheartedly recommend this match but so far, it’s been the best match.

These next four bouts I can’t in good conscious give ratings to as we were given the last 2-3 minutes of each match. Stryker had some decent selling, Tarek looked like a creature you’d find in the troll caverns sharing tea with Gollum, and Fairway was donning his best Buddy Lee Parker tribute outfit. We had clips of Tarek dropping Jeremy Jett on his head repeatedly, Fairway hitting a sickening sit out powerbomb on Collyer, and Shark Boy winning each of his encounters with Buff Blockbusters. Moving on …

This is the finals of the cruiserweight tournament that the 1999 show was built around. Some nice offense by Fairway with a big suplex and a facebuster. Really surreal seeing only about 800 people surrounding the ring in the vast, dark emptiness that is the Cincinnati Gardens. Shark Boy never really seemed to have gotten out of the blocks. Fairway with a huge legdrop from the top rope. I’ll admit, he’s working a really good heel, keeping the pace slow and the crowd out of it. Shark Boy gets a fluke win on a backslide. Not bad, considering Fairway controlled 99 percent of the match and Shark Boy got zero offense. Fairway pulled off the big moves really good.

This was going along at a good pace until Missy Hyatt had to stick her ugly mug into the proceedings for no reason by kicking Taylor with giant platform boots not seen this side of the local strip club and hitting him with the world’s worst DDT. Before that mess, this was rather enjoyable with both guys trading hammerlocks and hard elbows while doing some good mat work. Taylor took a big header into the post that sounded like to bowling balls banging together in the ball return. Prichard really seemd to enjoy working submissions. Taylor’s offense was pretty crisp. He got in a couple good suplexes, a few short jabs and made the match more enjoyable. These two could work together on every DVD I watch and I wouldn’t be opposed to it. Ending stretch was good too with them trading nearfalls and Taylor getting the upper hand with the flying forearm. Really fun match, despite the completely random Missy Hyatt interference that went nowhere.

Two more matches joined in progress here that I can't fairly rate. First up, we get Road Dogg laying in the corner and Snow rooting around underneath the ring for furniture. Then, there’s a sickening spot in the match where a table spot when awry and Road Dogg’s back nearly snapped in half taking a powerbomb on a table and the table didn’t budge an inch. Foley was throwing horrible punches when we joined his match. D-Lo got some sick air on a frog splash attempt but crash landed right on a chair. Let’s move on …

There was some really good stuff in the early going here with Benoit and Konnan exchanging holds on the match and Mysterio and Malenko doing some good cruiserweight style back and forth. The audio on this is really weird, no commentary and it sounds like the ring volume has been turned up really high, almost to the point where it sound like the sounds of people hitting the ring has been dubbed in, and the crowd really low. The action stayed pretty fast and furious with just lots of going from one move right into the other at points. The best way to describe it would be if you’re playing one of the old WWF video games, such as No Mercy, and just hitting move after move. Konnan didn’t do much except for chilling on the apron and coming in for his trademark spots like the rolling clotheline and the tequila sunrise submission. Match ended quickly on a roll-up from Mysterio and not a whole lot to really note from anyone as there wasn’t much out of the ordinary.

This is a tournament final to crown a new HWA heavyweight champion and D-Lo Brown of all people comes out holding the belt and cutting a promo beforehand. A bit more research shows he was the first HWA heavyweight champion so I suppose that makes sense. Fairway is still sporting his Buddy Lee Parker gear from earlier on this tape against Shark Boy. Did anyone know that Race Steele fought in WEC a few years ago? I didn’t until I randomly stumbled across that useless tidbit of information a few days ago. Chip’s argyle socks and golf cleat-esque shoes do not work with the sleeveless muscle shirt he’s sporting. Match was a bit sloppy in spots as Steele was noticeably way early on a number of things, most notably a gorilla press spot that he telegraphed even before Fairway was in position for it. Steele hit a nice running dive over the top rope and followed that up by tossing Fairway into the ringpost, which Chip took a huge 360 bump for. Fairway had a glorious botch where he tried to do a move similar to Chris Jericho’s lionsault but instead of springboarding, fell backwards onto the mat with this look on his face like someone falling backward. Camera completely missed the finish with Race Steele pinning Fairway to with the vacant title.

An ECW world title defense on the Pillman Memorial show? Sure, why the hell not. Right from the start Credible is busted open and we get a crowd brawl which I fondly remember since I saw this match live. I remember running down from my seat to the floor just to get to see the action up close and also taking home one of those hard plastic chairs that these two used throughout the match. Credible takes a bump outside the ring and literally bounces off a very uncooperative table. So far, this has been just a bunch of brawling. Raven kicking out of both a superkick and a tombstone piledriver barely elicits a reaction from the crowd. A second tombstone piledrive wins it for Credible in a match that felt very much like a main event of a random ECW on TNN episode.

This is the match that everyone associates with the Pillman Memorial shows. Some good techincal stuff abound in the first few minutes but things really get into high gear once Regal gets splattered on a DDT off the apron. Great spot where Benoit was chopping Regal who responded with a sickening headbutt and some vicious kicks to the body. Awesome double-underhook suplex from the top rope by Regal. Double headbutt spot just ruined any plans either guy had for the evening.  The nice thing about this match is that there was no wasted motion. Everything felt like it belonged and nothing felt out of place. A German suplex (probably at least the seventh or eighth one) followed up by a crossface defeated Regal. I'd say this is worth a least checking out as it's a very solid match but it's not as good and as epic as I remember it being.
Posted by Adam at 11:44 PM

6 seems a little low for Regal v. Benoit.. - I was at '99-'01 live and wonder why they didn't put on anything from 2001? from memory it was the best and biggest of them all.. feat. talent from all over the place inc. lots of WWE Superstars..

For years, we've been told that the money made from all these tribute shows went to Brian and Melanie's children so they could go to college.

But, Brian's kids Brittany and Brian Jr. have both said that they never received a single penny, because Melanie blew it all on both her drug addictions and buying her new partner a truck.

Luckily, Brian Sr.'s sister Linda came to Brittany and Brian Jr.'s rescue by paying for their clothes and food with her own money.

Also, Brian Jr. had to take out a loan to put himself through college.

Benoit vs Regal somehow had an even better match on a random episode of WWE Velocity in 2005. Those two always had magical chemistry. Watching those two face each other was always like watching Picasso at work. I also can't wait to see the main event from the 2001 installment. A Triple Threat Tag Team match between The Hardys, Edge & Christian & DDP & Kanyon.