Blog co-captain Adam had a PPV party at this pad for the show but I was stuck earning a wage in the zombie apocalypse known as retail.  Watched the show in HD when I got home and here are my compendious thoughts. 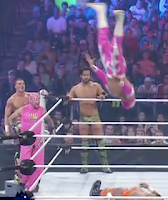 
Mike Rotundo's legacy lives on with Santino's singlet.  Fun pre-show fare.  Kind of ironic seeing Mahal (who formerly played the stereotypical foreign menace) using the Patriot's old finisher.  First traditional Survivor Series match had great dive sequence.  Clay massively botched a move on Tensai.  I had a cacophonous belly laugh at their expense.  Good guys gain momentum and steamroll them.  Lots of fluid athletic spots with Kidd excelling.  Kaitlyn's army issue green pants would have made her a perfect fit in the Truth Commission.  She could have been called "Gag Order".  I wonder what Recon's up to these days?  I liked Kaitlyn starting aggressive and getting an extended segment to beat down the thorn in her side.  Eve begging off was about a 2.5 on the John Tatum scale.  I think Kaitlyn could be the next Trish Stratus if the company gets behind her.  I didn't like the suddenness of the finish with Eve's suspect neckbreaker. 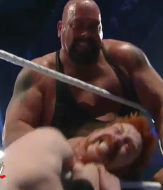 Dig Truth's Looney Tunes facials.  Standard Superstars match but the right guy (Cesaro) went over.  AJ/Vickie in-ring segment had the crowd deader than Mike Graham.  These guys will have to work hard to top their match at last month's PPV.  More methodical in large part  but demonstrated Show's physical dominance superbly.  All of the big finisher kick-outs at Hell in the Cell '12 made for a captivating final act but this one lumbered to an unsatisfying end that clearly sets up another chapter in this novella.  I dug the body of the match though even if it never came close to matching the intensity of their show-ending brawl on the most recent episode of SmackDown! that saw them smash a bunch of cars in a parking lot.

I probably owe it to the next traditional Survivor Series match to give it a re-watch down the road but found it middling upon initial screening.  Particularly the eliminations seemed as if as much thought had been put into them as the writers did choosing a salad dressing in catering.  Maybe it's also the fault of three-hour Raw shows every week but there was a suffocating sameness to this that made it feel minor next to classic Survivor Series bouts of yesteryear.  Main started solidly and when Punk and Cena decided to briefly work together to slow down the beast Ryback by putting him through a table the crowd momentarily awoke.  Cena's khaki shorts call to mind Indiana Jones sans the adventure and awe.  Some big near-falls robbed of their potential drama by a vapid Indianapolis crowd.  Seeing Jon Moxley and Tyler Black put Ryback through a table was certainly surprising and a nice shock -- although them assuredly being brought into the co. to be fed to Ryback is disappointing.   Weird finish as Cena got hit with something resembling Ryback's Shell Shocked finisher and was then out for several minutes while the attack happened culminating in Punk crawling over and pinning him.  Seconds later John rolls out of the ring and just strolls to the back.  Doing a "fuck finish" on two consecutive pay-per-views seems like a slap in the face to the paying customer.
Posted by Brian at 4:03 PM