The unofficial captains of each team (Tanahashi and Kojima) start us off with a nice grappling exchange, battling over control focusing on headlocks, manipulating wrists and limbs, etc.  I like the dynamic of both teams -- certainly more enticing on paper and in reality than Team Foley or Team Punk but I digress.  Hiroshi dispatches of the whole gang of ruffians with a series of dragon screw legwhips.  Rongai looks like he slept in an Osaka airport and made it to the show sans shower and/or proper nourishment minus the granola bar he scored off of Kyosuke Mikami backstage.  The fan favorites tag in and out in repetition quickly all taking a turn at wrenching NOSAWA's arm turing it into putty.  A double seated dropkick by Apollo 55 clearly whiffed on TAKA but he was feeling generous and sold the phantom impact.  Crazy double-team where Fergal had Rongai up on his shoulders out on the floor, so you're thinking, "Doomsday Device!" but instead Taguchi springboards over the top with an odd crossbody and sort of rides NOSAWA down like an infant's first slide experience at the playground. 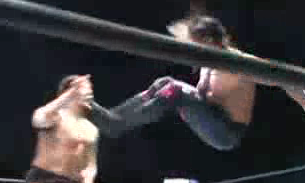 One of the best dropkicks in the business.  I hope he has good dental.

Devitt gets flak online but I thought his selling of his hurt arm was top-notch.  Kojima is a pro posing arrogantly to the disdain of the crowd after taking a cheap shot at Hiroshi on the apron.  Tanahashi gets tossed to the floor bumping nastily off of the apron on the way down.  The heels have a clear focus now on Prince's limp limb and start picking it apart with gusto.  I think Ryusuke had been watching some Tatanka tape -- his top rope tomahawk chop gave it away.  Satoshi busts out a few different elbow drop variations including one off of the top that were really choice.   We get another blazing Tanahashi/Kojima sequence late that puts me on the edge of my seat (clearly this was a money program that should have been much bigger).  NOSAWA shows his All Japan allegiance breaking out a Shining Wizard and almost beating Hiroshi.  Tanahashi finishes Rongai off with the High Fly Flow.  Not surprisingly the guy highest on the food chain goes over the guy lowest but getting there was quite fun.

I'll be happy to see Tanahashi go into the Wrestling Observer HoF this year -- he certainly deserves it and is an exceptional talent and one of the best on the planet.  Watching this you also get a sense Kojima has plenty to offer even later in his career.  We didn't get much TAKA but for a 16 min. effort this was an entertaining cap to a strong minor show.  I'd recommend getting any 2011 NJPW you can obtain and this show would make a nice addition to any collection.  On the same chilly February evening down the road at Korakuen Hall AJPW ran a show with the main event of Keiji Mutoh and Shinjiro Ohtani vs. Masakatsu Funaki and AKIRA, and while the All Japan show drew a bigger crowd (1,900 which is a good 400+ more in attendance) I'm not entirely sure if that action was as satisfying as what was on display here.
Posted by Brian at 9:26 AM