My first thought of Boone was, "Man, dude looks like a tinier version of Billy Jack Haynes" only to shorty after be informed via commentary he was in fact a cousin of Haynes'. Fine opener that lacked depth but I was lulled into a DMT like trance by its rhythms. Boone's preferred method of selling was lying flat on his back and taking really big, exaggerated breaths.  I have a soft spot for the Russians but man, oh man, was this some of the lightest offense I've ever seen.  There were a few basic things like clotheslines (and a double clothesline near the end) that looked fluffier and about as low impact as a comforting roll around fresh luxury hotel linens.  Boris' match-ending flying headbutt wasn't convincing either.  Roma didn't look like the sniveling heel I recalled from WCW as he was definitely on the gas here completely blown up with protruding veins and enough testosterone for a whole varsity football team.

Khan and Bam had a really great face-off early in their match that I popped for ending with Khan trying to sneak in a spinning backfist and eating an atomic drop for his efforts.  I just watched Khan versus Chris Adams from Watts' Mid-South the other morning so this is a nice juxtaposition.  Bigelow sells Khan's throat-based offense with the vigor of Vincent Price.  Bam ducked the dreaded green mist and won with a big splash that got a real big reaction from the live crowd.  JYD has an uneven reputation especially for his in-ring contributions so I went into screening this with a sharp eye to see if I could detect anything to support his case as a potential WON HoF candidate down the road.  These guys forego strategy early to just trade big punches and see who'll be left standing.  Hercules emotes frustration superbly albeit not being known for his subtlety.  Dog's version of "Hulking up" looked like a painful seizure.  Hercules going for the full-nelson would have had more drama had he effectively worked the neck at all proceeding it.  Cheap finish stunk.  JYD's trunks say "Thump" which interestingly was the sound the remote control made when I tossed it on the couch and retreated to bed after this match.

They forego the usual formula early and Strike Force looks strong and motivated.  The work was fine and I quite dug it but the booking was certainly odd.  It went to a double DQ.  Why not put the tag champions Strike Force over strong?  Especially since a heel tag team went over clean earlier in the show.  I guess they felt a need to protect the Islanders -- that or Haku threatened to rip someone's eye out if they jobbed.  DiBiase came out on crutches so gave up Virgil as a replacement.  No thanks.  This was a dog fart and patently insulting to the fans in Philadelphia.

Forgot how glorious Patera's afro was.  For a makeshift team these guys looked great having Demolition on their heels early in trouble.  I totally found myself buying into a possible upset even though the disc skipping was a nuisance.  I've never seen a guy get punched so hard he got instant bed head but that exact thing happened here (pictured below).  Finish was as cheap as a used copy of Hero Wanted on DVD. 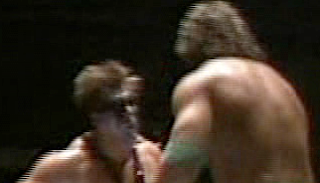 I thought it was straight to the main next but no!  Valentine versus... wait, get the fuck out of here, is that one of the California Raisins?  Nope just a grossly tanned Ivan Putski.  No one would mistake Valentine for John Dodson but he gets the job done.  With all the chop exchanges overflowing on the indies it was nice to see guys trading belly punches for a change.  "The Hammer" gets a clean win with the figure four in a pleasantly surprising finish.

"I heard it through the grapevine!"

I wish James Lipton could get Honky Tonk Man onto an episode of Inside the Actor's Studio.  I'd love to hear him make chicken salad out of some of the chicken shit in Ferris' career.  You know a disc is severely damaged when it takes you a half-hour to get through the last ten minutes of it.  No worries just meant I got to spend three times the amount of time with Randy Poffo this sunny autumn afternoon so I'm not complaining!  The craft which with Savage withers on the mat is nonpareil.  In the new book The Pro Wrestling Hall of Fame: Heroes & Icons they explore the traditional different forms of selling ("registering," "selling," and "dying") and Savage serves up a sampling of 'em all here.  Anyone else ever wonder why Honky's icon on WWF WrestleMania for the NES looked like Wladziu Liberace?  Is there an agreed composite "Top 5" matches of HTM out there?  Not sure but of what I've seen this would be on mine.  Countout finish on a main event seems like an awfully lousy thing to do to your paying audience in a town on your regular touring loop but hindsight is 20/20 which ironically is probably what Honky thinks about his participation in this stunt:

Yo-Yo Ma wouldn't have done that shit!
Posted by Brian at 3:10 PM