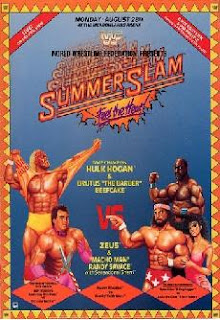 From here on out, I’ll be doing reviews differently. I’ll be typing my notes pretty much verbatim as I have them written in my notebook. Here we go.

1) The Hart Foundation vs. Arn Anderson & Tully Blanchard – 7
Both teams match up well. Anvil no selling a lot. Tully’s chops and facials were good. Loved the big splash Tully took in the corner. Harts really seemed to dominate early and through middle of bout. Anvil was a beast, beating the shit out of everyone and taking a wild bump after smashing into the corner, which led to Arn and Tully control. Seismic collision between Arn and Anvil. Arn just amazing with selling and whatnot. Really liked the mat work between Bret and Tully even though Bret seemed a bit mechanical. Finish was a bit off with some legal man issues and a rather soft double ax from Arn leading to them getting the pin. Really good match with two of the top teams of the era going non-stop.

2) The Honky Tonk Man vs. Dusty Rhodes – 4
Been nearly six years since I’ve seen this match. Can’t remember what score I gave it then. Phantom elbow from Dusty looked like hell. Dusty seemed more concerned about playing to crowd at points. Honky relied on headlocks as much as Randy Orton. This felt really sloppy and had a useless ref bump. Dusty sold the chinlocks like he was napping. Stiff guitar shot while the ref was out. Not as fun or as good as I remember it being from the Dusty DVD.

3) Mr. Perfect vs. The Red Rooster – 2
Taylor looks ridiculous with the spiked red hair. Looked like Rooster blew out a knee on a leapfrog. Awesome standing dropkick from Perfect. Pretty quick match with a nice Perfect-plex. Turned into a squash.

4) The Rockers & Tito Santana vs. The Rougeau Brothers & Rick Martel – 6
Story of this is clearly Santana vs. Martel. Santana plays a great face in peril. Heel team really good at the typical antics, cheating, etc. Opening few minutes were hot action. Tito took a hellacious beating. Martel selling during Shawn’s hot tag great. Awesome forearm by Tito causes crowd to lose their shit. Finish was bit hectic but a fun and very wild six-man tag with a great, fast pace. Jannetty didn’t have much offense. Shawn had a decent looking fist drop off the hot tag. Jacques Rougeau looked a bit like Shane Douglas from afar.

5) Intercontinental Title: Rick Rude vs. The Ultimate Warrior – 7
Rude took a wild bump the the floor a few minutes in. Warrior completely no sells Rude’s offense. Rude’s selling has been absolutely fantastic for Warrior’s light offense. Huge sells from Rude after getting whipped into the corner and an awesome sell on an atomic drop. Love Rude’s giant perm. Ref bump didn’t seem contrived or telegraphed. Warrior’s selling left a lot to be desired. This has been just a great match thus far. Rude’s inverted piledriver was crazy but Warrior took it on the shoulders like a chump. What business did Piper have at ringside during the bout? Nearfalls were decent but lost some steam when Piper came out. Always thought Warrior’s splash finisher was lame? Seriously, what idiot does a splash on his opponent’s back then rolls him over? I guess Ultimate Warrior. Match was pretty much the Rick Rude show and I enjoyed every minute of it. Probably one of Warrior’s best matches ever. Much better than the Warrior/Rude match from WrestleMania 5.

6) The Twin Towers & Andre the Giant vs. Demolition & Hacksaw Jim Duggan – 4
Duggan looked pretty goofy with a crown and demolition mask. I guess he was a king here? I didn’t vote for him. More of a brawling style six-man as compared to the other one earlier in the card. Action was pretty much out of control with a lot of legality issues. Ax loved his forearm blows. Liked Andre just dropping his big, giant ass on Smash.

7) Hercules vs. Greg Valentine – 3
Ronnie Garvin was the guest ring announcer and I could tell from the get-go this would be nothing but a vehicle for the Valentine/Garvin feud. Not really a lot to the match. Watching Hercules wrestle is like watching an expired sack of potatoes wrestling. Not only does it stink, but it’s ugly too. Valentine cheated with his feet on the ropes for the win and then Garvin announced Hercules as the winner. Lame.

8) Ted DiBiase vs. Jimmy Snuka – 3
Crowd was completely dead. Snuka totally mis-timed a leapfrog. Nice shotgun by DiBiase. In-ring action was decent but looked like both guys were completely on auto-pilot. Nice bump by DiBiase after missing a back elbow from the second rope. Bad finish with the count-out.

9) Randy Savage & Zeus vs. Hulk Hogan & Brutus Beefcake – 4
Hogan starts from behind early with Zeus doing the big no-sell job. Zeus held a bearhug for two minutes in his biggest move of the match but it felt like it was held for two months. Couldn’t really buy Hogan as the face in peril. This was worked more like a handicap match as Zeus was pretty useless. Macho was just a bump machine just taking bump after bump for Hogan and Beefcake. Good God this was a chaotic mess at the end with Hogan and Zeus one-on-one and featuring interference by Sherri and a loaded purse. Zeus sold Hogan’s offense like he was falling backwards off a cliff. Hogan hit Zeus with the purse and the legdrop for the win. Zeus looked worse than I remember him being. Match was the Savage show for his team. Ok match but nothing overly exciting.
Posted by Adam at 9:21 PM