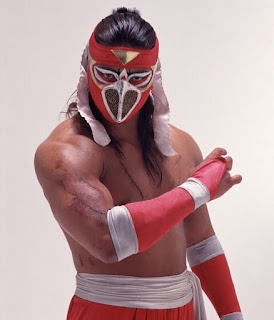 Woke up to news of Hayabusa’s passing. Since his career-ending injury he’d been largely wheelchair-bound until last year surfacing at a show and being able to rise to his feet amongst his peers. Growing up my brother was never more than a fringe fan but Hayabusa captured his imagination with his colorful characterization and fluid athleticism. He ordered both the black and red versions of Hayabusa’s mask and we’d take to doing springboard moonsaults in our backyard off a rickety chain-link fence onto a mattress we used for drafting our own $15,000 Body Slam Challenges. We trekked to ECW Heat Wave ’98 to see his own major US appearance live.

Unfortunately this is clipped so I can’t fairly rate it. I believe the date is accurate. The thrust and precision of Hayabusa’s spinning kicks would leave even high-level MMA fighters in awe. Maybe it would end Anthony Pettis’ losing streak if he started wearing Hayabusa’s mask. These guys were compared to each other constantly and yes they’ve both got lots of bodily scars and baggy parachute pants but Hayabusa is such a smoother more seamless practitioner of the pro wres arts. Kudos to Sabu for innovative spots seen here somersaulting over a hunched referee out to the floor and later doing a crossbody out onto Hayabusa who was sitting in a chair. A 450° to the floor through a table is dodged by Hayabusa leaving Sabu to crash into the splintered furniture. It’s a move you rarely see Sabu do, here paying homage to the combatant he was at war with, and it’s the very same move (dubbed the Firebird Splash) Hayabusa later uses to secure that night’s victory. RIP Hayabusa. I’m sure he’s in the heavens now performing Falcon Arrows on the other legends.
Posted by Brian at 10:43 AM